meat, milk and climate - Why it is absolutely necessary to reduce the consumption of animal products

According to FAO livestock and other farm animals produce 18 per cent of anthropogenic greenhouse gas emissions. Other organizations have said that the figure might be considerably higher. A report by the world-famous Worldwatch institute concluded that animal husbandry might actually produce more than 50 per cent of the greenhouse gas emissions that can be attributed to human activities. What is the truth between these conflicting views? Meat, Milk & Climate explains why some of the claims of the Worldwatch Institute are genuinely controversial, and will remain so, even though many of its points are valid and cannot really be denied.More importantly, the book argues that even the Worldwatch Institute has not taken into account all the important sources of greenhouse gas emissions that should be attributed, at least partly, on meat production. The book summarizes the results of new studies that have already been made on these emissions and points out key areas which have scarcely been touched by scientific research attention.Meat, Milk & Climate might well be the most comprehensive analysis this far about an important subject that connects climate change with water and animal welfare politics, public health and the efforts to limit the pollution of lakes, rivers and shallow seas. Sivujen alasyrjällä hieman kulumaa ja takakannessa hintatarra, muuten siisti.
Hinta: 7 EUR 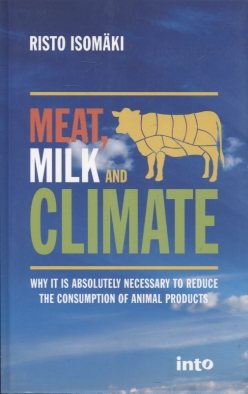